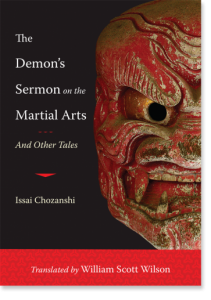 The Demon’s Sermon on the Martial Arts:

Based on the Translation by William Scott Wilson

202 Pages (the pages are not numbered)

This is the second in a series of graphic novel adaptations of classic martial arts books from Shambhala Publishing.  The first is the Book of Five Rings-2012 (review to follow in a few weeks) and the third is a forthcoming version of the story of the 47 Ronin due out November 5th 2013.

The Demon’s Sermon on the Martial Arts takes the translation by the renowned translator William Scott Wilson and adapts it to the graphic novel/manga format.  This book may be of particular interest to Aikido practitioners due to O Sensei’s well known interest in the tengu (translated in English as demon). It is even possible O Sensei read the book as a part of his martial arts studies.

Background on the Original Book and Translation

The graphic novel is based on an English translation by William Scott Wilson, published by Kodansha in 2006.  Mr. Wilson has translated many books from Japanese that are of interest to martial arts students. These include:  The Book of Five Rings (2002-which is also available in graphic novel form from Shambhala), Hagakure (Kodansha 1979); The Life Giving Sword by Yagyu Munenori (Kodansha 2003) and The Unfettered Mind by Takuan Soho (Kodansha 1986).

The Adaptation and Illustration

The translation was adapted by Sean Michael Wilson, who currently lives in Japan.  He is a Scottish author of over a dozen books including the graphic novel versions of The Book of Five Rings and Hagakure (published by Kodansha 2011).  He has a blog site at seanmichaelwilson.weebly.com.

The illustrator is Michiru Morikawa.  She is an award winning illustrator and manga artist.  There are numerous internet sites with information about her work including one from the BBC and Facebook.

What is a Demon?

The word translated as demon is tengu in Japanese.  Unlike the western conception of a demon as being in league with evil forces, the tengu is a spirit who inhabits the mountains and in addition to having a trickster side, possesses spiritual knowledge.

This knowledge was regarded as valuable by martial arts practitioners who sought the deepest teachings of the martial arts, beyond technique.  According to the belief of the day, the tengu would impart this knowledge only to people they felt were worthy.

“It was these creatures who are said to have taught their hidden traditions of swordsmanship to Yoshitsune (Minamoto no Yoshitsune 1159-1189, a legendary warrior, general and strategist), and more recently, revealed the secrets of Aikido to Ueshiba Morihei on Mount Kurma…Thus both the mountains and the tengu inhabit a sort of twilight zone between this world and the other, a dual existence, at once spiritual and earthbound.  It is to this liminal world that the swordsman must go to learn the deepest secrets of his art.” (page 2 of the afterword)

It is in this context that the stories and philosophies of the tengu are passed on to those diligent and brave enough to seek them out.

The opening part of this chapter summarizes the philosophy of the entire treatise in the search for knowledge beyond technique:  “If one is not deeply resolved and does not intently study the mind, he will never become enlightened to the essence of his own mind.”  (page 1 of Chapter 1)

Transformation of the Sparrow and the Butterfly

This section teaches that we should not become attached to a particular form because all form is impermanent.  In one section a dying man is talking with his family priest and says: “The ten thousand things are born from emptiness and return to emptiness.”  (page 11)

Meeting the Gods of Poverty in a Dream

This section relates the very Buddhist sentiment that attachment to one’s status in life whether rich or poor, famous or infamous is the source of suffering.  It tells the story of a very poor man who is taught in a dream by the gods of poverty what is really important:

“But rather, following good and bad fortune or prosperity and decline as one meets them, and calming enjoying oneself in the midst of creation and change:  this is the greatest happiness under heaven.” (page 13)

The Greatest Joys of the Cicada and Its Cast–Off Shell

This section continues the theme of non-attachment as the key to avoiding suffering and living a happy life:  “When you don’t insert your own selfish will, you acquire the greatest happiness in the world and won’t be defeated by things.  While you’re alive, follow only that way with everything you have. When you die, just be content with your own return.” (page 11)

This section contains a dialogue between a hawk and an owl regarding the importance of accepting your form and circumstance in life:  Each and every thing has been granted food and a lodging place that will not cause it problems. To go beyond itself and envy other beings would be turning its back on heaven.”  (page 4)

The opening of this chapter explains the difference between the common understanding and that of mastery:  “The common man has not yet cut through the root of confusion of life and death. This always lies concealed and acts as a cover over the spirit.”  (page 4)

The Centipede Questions the Snake

In this part there is a dialogue between a centipede and a snake.  They relate the very Chinese view of the union of the one and the many:  “The centipede’s many legs, the snake’s lack of legs-both are the creator’s incomprehensible doings.  Thus, the centipede’s many give him no adversity; and the snake, with no legs at all does not find himself handicapped.”  (page 5)

This section opens with a discussion and examples of the importance of oneness:  “There are many different responses to man’s daily needs, but for one who has grasped the way, his mind is not moved by phenomena.  The essence of the mind is selfless and without desire, and thus at peace and undisturbed.” (page 2)

The Toad’s Way of the Gods

This lesson is told through a dialogue between a rat and a toad.  The rat is praying that all cats be eliminated to assure his safety and security.  The toad explains the folly of this attitude and the proper way to petition the gods:  “There is a way to employ the deities. You must first remove all your selfish and distracting ideas from your mind and so purify yourself from within.  This is called ‘inner purity.’ The day that you go to the shrine, bathe, change your clothing, do not eat disgusting things, and so purify your body, this is called ‘outer purity.”  (page 7)

The Mysterious Technique of the Cat

This is the most famous story in the book and has been a part of many other books including D. T. Suzuki’s Zen and Japanese Culture, Bollingen Series LXIV Princeton University Press 1959, pages 428-435.

It tells the story of rat who confounds not only all the cats in the neighborhood and even a skilled samurai who are no match for him.  In desperation a “master cat” is called in and dispatches the rat with astonishing ease. The cats and the samurai beg the cat to tell them the secret to his marvelous skill:  “Simply, without thinking, without doing anything, move by following your natural perception and your movement will have no form. And when you have no form, there is nothing in heaven and earth that could be your opponent.”  (page 19)

The book concludes with a simple yet satisfying statement by the swordsman who sought and received the tengu’s wisdom:  “I have been to the mountains, met with demons, and now I can carry on…man is a moving being.” (page 5)

The afterword provides some background information on the history and philosophy of the text.  Mr. Wilson includes a brief history of the tengu; the book’s author and the book itself. One interesting teaching he outlines is about the fundamental rhythm underlying the universe and everything in it:  “Jo, ha, kyu is the fundamental rhythm of the universe and the rhythm with which every art…aims to be in accord…Jo is described as the combat before the attack, ha as the attack itself, and kyu as the responding blow of each combatant.”  (page 3)

After reading the afterword you can go back and reread the text with deeper insight.

Difference Between the Graphic Novel and the Print Translation

The graphic novel faithfully follows the spirit of the William Scott Wilson translation.  The primary difference is the graphic novel does not include the chapters: The Seagull and the Mayfly Discuss the Tao; Profit and Loss for the Bulbul and the Wren; The Skills of the Heron and the Crow; The Dream of the Cucumber and The Ghost at the Old Temple.

What the graphic novel format provides not in the printed translation is the emotion conveyed by the illustrations.  One I found particularly engaging was a scene with the samurai bowing to the cat and asking for instruction in The Mysterious Technique of the Cat, (page 21).

Many of the teachings and quotes from the Demon’s Sermon could have come from Morihei Ueshiba.  Two examples:

The teaching of the Demon’s Sermon is of great value for both martial arts students and everyone else.  Readers who like the manga format will relate very well to this modern pictorial expression of this classic book and its philosophy.