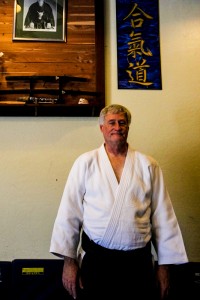 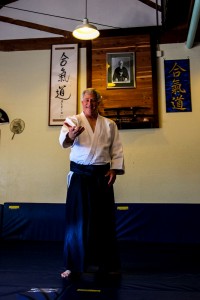 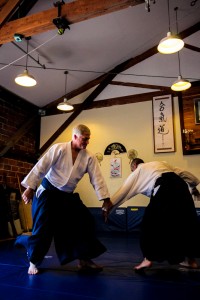 Sensei Noha is a 6th Degree Aikido Black Belt, founder, owner and chief instructor of Aikido of Petaluma.  Bob Started Aikido training in Mountain view in 1966 under Ed Riggs and Sig Kufferath. Shortly thereafter, he began his training and a life long friendship with Robert Nadeau, Shihan, who was a direct student of Morihei Ueshiba, the founder of AIkido.

In the late 1960s, Sensei Noha started his teaching career as an assistant at the Mountain View dojo where he began, and left to open up the first Aikido school in Washington DC in 1970. He taught in the Washington DC Area until 1975, where he became a Security Police Tactics instructor for the Security Police at Andrews Air Force Base. From 1975 until 1977 Sensei Noha opened and operated an Aikido school in the Buffalo NY area.

In 1977 he returned to the San Francisco Bay Area and continued his training with Robert Nadeau Sensei. In 1982 Sensei Noha opened Aikido of Novato, and in 1983 Aikido of Petaluma.  In January 2000, Sensei Noha achieved go dan, (5th degree black belt).

In January of 2013, with the recommendation of sensei Robert Frager and the late Hiroshi Kato Shihan, Sensei Noha was awarded the rank of 6th degree black belt (roku dan).

In addition to Bob’s Aikido training, he has been a devoted student and teacher of T’ai Chi. having studied since 1972. Sensei Noha has practiced the Yang short form from both Professor Cheng Man-Ching and Robert W. Smith, a senior student of Professor Cheng. Sensei Noha also has a background in Judo, Kenpo Karate, Pa Kua Chang, Hsing-I and western boxing.

“Bobs goal as a teacher appears to be to draw out the best in the students. He seems to be happiest when he sees his students surpass who they were the day before. For a man I consider a powerful martial artist I find the fact he uses the art as a tool for reflection and personal development rather than a goal in itself a wonderful thing.”  Sasun Torikian.

For 20 years, Noha has been offering the gentle martial art of aikido at his Petaluma school. This Saturday, a celebration of those two decades takes place.

By JUD SNYDER
ARGUS COURIER STAFF
You could say Robert Noha’s life is immersed in Oriental philosophy. But that’s only partially true, for Noha has his Aikido of Petaluma school firmly planted amid the realities of the 21st century. What he’s bringing, to summarize ever-so briefly, is “gentle martial arts for the pressures of daily life.”

Petalumans will have an opportunity to see and get a grasp on Aikido’s “gentle martial arts,” Saturday, May 17, when Aikido of Petaluma holds its 20th anniversary celebration from 10 a.m. to 5 p.m. Location is the School of Ballet, Western and Howard streets. Admission is free.

Demonstrations and classes will be held from 10 a.m. to noon, followed by an hour of lunch and aikido videos. Highlight of the afternoon will be a free seminar with Robert Nadeau, Sensei of the seventh Dan, who has studied with the actual founder of aikido, Morehei Ueshiba (1883-1969). “Sensei” means teacher or director and Dan is the ranking (The highest is ninth, Noha is a fifth Dan).

In Noha’s future plans this year is a children’s aikido program, for kids from 9 to 13 years of age. This starts July 10.

Noha’s philosophy concerning aikido is quite concise. It brings in the eternal “yin and yang” struggle humans face daily.

“You see, at one level are the tasks you have to perform, the exterior aspects of life, your job, raising a family,” he began. “At the same time there’s an interior need of peace and harmony in order to function in the real world. People, many times, choose one over the other. Aikido brings these elements together.”

Relaxing in the immaculate living room of his Baywood Drive home with its Mission furniture and modest selection of Oriental art, Noha said this achievement of inner harmony accompanied with self-defense techniques to develop confidence, can be seen by the instructor.

“When the training is going well, students will be ‘in balance.’ I can get feedback and this in turn helps me to improve myself. Progress can be sensed for we’re dealing with a diversity of people, from children to seniors of both genders,” he said.

Noha’s good friend, John Records of the Committee on the Shelterless (COTS), phrases it this way: “Although the techniques certainly can be used effectively for self-defense, the emphasis is on helping students to become well-rounded individuals with the physical, emotional and spiritual aspects of their being developed in harmony.” Records put together a Web site for Noha’s school: aikidopetaluma.com. Phone number is 762-7632.

Simplistically put, aikido lies somewhere in between the strictly martial arts of judo and karate and the slow, graceful exercises of t’ai chi Oriental movements.

Noha’s journey to his present status is fascinating. At a glance, “Noha” could be a Japanese name, but he was born in Chicago of Czechoslovakian parents and that’s their full name. “It’s true. My brother visited Prague a few years back and brought back a page from the city phone directory with several columns of ‘Noha’ names listed.”

Noha’s father was a parachutist with the U.S. Airborne forces during the Second World War and the Noha family did a lot of traveling. “My father parachuted into Japan the very day and hour they were signing the peace treaty aboard the U.S.S. Missouri.”

As a teenager living in Menlo Park and taking boxing lessons, Noha saw a small ad in a magazine concerning a book called “Aikido in Daily Life,” written by Nadeau.

“There was something intriguing about the ad and it led me to visit an aikido school nearby,” said Noha. “The teacher was Bob Nadeau himself and the minute I walked in the door it felt like home to me.”

He added, “There was something there that I knew I wanted to spend time with, a most unusual choice for a teenager at that time, I admit. I never left aikido after that.”

Noha’s family moved to the east coast and settled in Maryland near his father’s base. He enrolled in the University of Maryland, majoring in philosophy (it was the aikido “impact” at work), earned his degree, served a hitch in the U.S. Air Force reserves, set up an aikido school in College Park, Md., then moved to Buffalo where he started another aikido school. He also worked teaching security police forces aikido techniques at various military bases. Then it was back to California.

With 20 years of aikido of Petaluma under his belt, a sense of permanence no doubt exists in the Noha family. His wife, Martha, was a student of his in the Washington DC area, and they have two adult children, David, 32, and Emily, 26. The house also is the home for two cats, Archie, and a large Maine Coon called Max. It was Albert Schweitzer who said, “there are two means of refuge from the miseries of life: music and cats.” He was unaware at the time, apparently, of the existence of aikido.

Noha, 52, is currently immersed in Joseph Campbell’s book, “Sake and Satori,” an exploration of Japanese folklore by the late author, and is an avid reader of history books dealing with all eras and World War II, especially those by Stephen Ambrose. An unobtrusive cabinet in the living room conceals a television console and a collection of CDs, mostly classical. He subscribes to the British journal, “The Economist,” to get a balanced view of world affairs.

“Balance” is an important word in aikido culture. “As a sensei, I have a sense of obligation to the students, a need to help them interact better with their families and co-workers. The aim is to instill a feeling they can make more of their life than it currently is.”