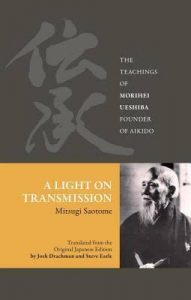 Review of A Light On Transmission

This book is by Mitsugi Saotome, one of the few remaining students of Aikido Founder Morihei Ueshiba.  Saotome Sensei had 15 years of long term, in-depth practice with O Sensei Morihei Ueshiba.

A Light on Transmission is subtitled The Teachings of Morihei Ueshiba Founder of Aikido and is a personal memoir of Saotome Sensei’s relationship with the Founder.

There are many stories from Saotome Sensei’s training with the Founder.   He then very effectively provides an instructional context that can be applied to practice both on and off the mat.

There are also many photographs of Saotome Sensei training with O Sensei. Cedar Forge Press has done a good job of high quality book design in a hard cover and nicely bound format.

The book does not focus on specific techniques (his book The Principles of Aikido does that).  It offers very deep approaches to training that are the result of Saotome Sensei’s lifetime of dedicated training and teaching.  He also shares his views and experiences on the spiritual aspects of Aikido practice and Japanese culture.

The book starts with a riveting story about his final time as uke for O Sensei shortly before O Sensei’s passing:

“Attack!” His shout cracked at me like thunder…in the same instant as my attack, this little old man transformed into a colossal mountain of rock…A dart of intense pain…pierced to the core of my head, while my body floated high and feather-like in pitch dark space…This was the last time that I took ukemi for the Founder of Aikido, Morihei Ueshiba.  He passed away just one month later. (Page 1)

The preface continues by discussing the spread of Aikido throughout the world and O Sensei’s view of it.  He concludes with:

Aikido belongs to no single individual, organization or country.  It is a cultural asset of the world community to be shared and developed by people everywhere.  (Page 2)

Chapter 1 The Founding of Aikido

Chapter 1 provides information on the founder’s life and how the art was created and spread throughout Japan and the world.

In this chapter he discusses Aikido from the context of both cultural and scientific principles.  He also pays tribute to O Sensei’s son, Kisshomaru, for his leadership as the art spread worldwide after the Second World War:

One of my fondest memories of Kisshomaru Sensei is…listening to his stories about the difficulties encountered in building Aikido and his dreams and vision of Aikido’s future.  (Page 14)

Saotome Sensei concludes the chapter with his own wish to preserve Aikido’s origins:

But now that Aikido has spread and become known throughout the world, the time has come for us, as Aikido practitioners, to return to the state of beginner’s mind and to ask the question, just what is it that we are doing?  (Page 15)

Chapter 2 The Universe as Life Giver The Womb of Life

This chapter discusses many of the deepest elements of Aikido cosmology and spirituality.

The sub-headings of this chapter include:

One of the most valuable features, spread throughout the book, are dialogues between O Sensei and Saotome Sensei.  Here is an example:

The Founder:  Your very existence as a living entity with a unique personality is nothing less than a miracle and expression of universal love.  Short of that realization, you cannot expect either to master Aikido or to become an example of what it means to be a compassionate human being.

Saotome:  I am a miracle?

Founder:  Yes. And until you wake up to this reality, you will neither understand the ultimate meaning of Aikido nor be capable of the true expression of love.  (Page 30)

Chapter 3 The Mission of the Martial Way

This chapter provides Saotome Sensei’s perspective on Aikido and the martial or warrior path.  The subheadings in this chapter include:

Here is an example:

Once, when I asked Aikido’s Founder, “What is the most important thing in martial training?”  he responded as follows:

Proper conduct in everyday life-because getting along well with others and showing respect for others is part of the art of not making enemies and not leaving yourself open to attack.  (Page 44)

Chapter 4 Aikido as a Martial Art

This chapter includes several subheadings on Oral Teachings of the Founder:

Here is an example:

One must look beyond the historical texts to awaken to the true meaning and divine purpose of the martial way.   Awakening occurs from within; it is incumbent upon on each of us to look deeply into the core of our own being and to discover where we came from and what we are meant to do.  This is the mission imparted to each of by heaven. (Page 65)

Saotome Sensei echoes O Sensei in this regard:

As human beings, we participate volitionally in the charting of the course of our lives and are not limited to reactivity but, rather, imagine the future and recognize the distinction between life and death.  We have the ability to live with awareness and understanding. (Page 70)

This chapter provides guidance on how to apply the deep teaching outlined in the earlier chapters into on the mat training.

Some of the subheadings in this chapter are:

In the section on ukemi, for example, Saotome Sensei shares some insight from O Sensei:

The Founder’s concept of ukemi, thus, included the cultivation of judgement with regard to one’s relationship with the people and objects of the natural world.  Learning to take ukemi is not just a physical discipline but a mental discipline with a profoundly spiritual dimension: it demands the development of sensitivity and sensibility through greater awareness and expansion of consciousness.  (Page 77)

The subheadings in this chapter include:

In response to a question from a student regarding the proper goals and value of training Saotome Sensei shares O Sensei’s answer:

Don’t waste your time trying to become like me, but put your energy into becoming better and stronger at what you do in your business.  To be strong means many different things, so please seek to become strong in your pursuit of the mission attributed you by heaven. What good is it to become physically strong if at the same time you let your life’s work go by the way?”  (Page 110)

Chapter 7 Japan’s Place in the World

The contribution of Japanese culture and its place in the world is the focus of this chapter.

Saotome Sensei shares his views on how Japanese culture can provide beneficial examples for the world at large:

We Japanese are known to have a hearty appetite for learning and knowledge…The background to this life-long dedication to learning, I believe, is to be found in the “samurai way of life” and is grounded in the traditional cultivation of the “heart and mind of budo.”  (Page 133)

Epilogue:  In a Foreign Land

Here Saotome Sensei discusses his own legacy and accomplishments as someone entering his eighth decade and with over 60 years of dedicated training and teaching.

Saotome Sensei concludes the epilogue and the book with these inspiring words:

There is no sole path to truth or spiritual salvation.  However, in this atomic age, the path of coexistence and mutual prosperity is the only one that does not lead to mass suicide.  In the interest of continuation of human society and of a world with a future, we must realize the integration of Eastern and Western wisdom.  (Page 143)

This book and Saotome Sensei’s lifelong dedication to the practice and sharing of Aikido is a wonderful example of contributing to this worthy goal.