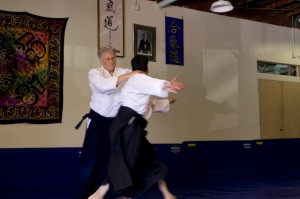 We had a very successful celebration today of Aikido of Petaluma’s Grand Reopening in our new facilities. Sensei gave an introduction in the energy class, discussing how this is a practice derived from work that Robert Nadeau Shihan has developed.

In T’ai Chi, he gave a very thorough explanation of the Yang style short form, including some of the origins of the art and how Professer Cheng Man Ch’ing evolved it into the short form that we practice and went over some of the basic movements.

Finally, in Aikido we had several returning students and an Aikido practitioner new to our school. Since there was no one new to Aikido, we conducted a regular class and then broke early to watch movies of O Sensei, outlining how his practice changed and evolved from the early 1940s, to the 50s and finally the late 60s shortly before he passed.